Home » When did electric cars start to become popular? 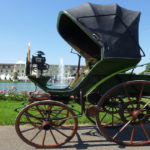 The History of the Electric Car, In 1828, Ányos Jedlik, a Hungarian who invented an early type of electric motor created the tiny model car powered by his new motor. In 1834, Vermont blacksmith Thomas Davenport, the inventor of the first American DC electric motor, installed his motor in a small model car, which he operated on a short circular electrified track. In 1835, Professor Sibrandus Stratingh of Groningen, the Netherlands, and his assistant Christopher Becker created a small-scale electrical car, powered by non-rechargeable primary cells. In 1838, Scotsman Robert Davidson built an electric locomotive that attained a speed of 4 miles per hour (6 km/h). In England, a patent was granted in 1840 for the use of tracks as conductors of electric current, and similar American patents were issued to Lilley and Colten in 1847. Sources point to different creations as the first electric car. Between 1832 and 1839 […]