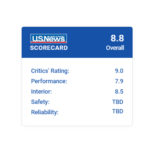 Currently, the Toyota Avalon Hybrid has a score of 8.8 out of 10 which is based on our evaluation of 15 pieces of research and data elements using various sources.

The Toyota Avalon Hybrid fared well in our rankings in previous years, and things are no different after the 2019 redesign. This is a well-rounded sedan with few major flaws.

Is the Toyota Avalon Hybrid a Good Car?

Yes, the Toyota Avalon Hybrid is a good car. It gets dynamite fuel economy by large car standards while delivering a smooth ride and capable handling. The powertrain is uninspiring, but it’s fine for most driving situations. Inside, this Toyota looks and feels upscale, provides two rows of roomy seats, and offers many driver assistance features. On the whole, few rivals bring as much to the table as the Avalon Hybrid.

Should I Buy the Toyota Avalon Hybrid?

The Avalon Hybrid makes a great choice for large-car shoppers, and while it has a higher price tag than many class rivals, it provides a lot of bang for the buck. Its combined city/highway fuel economy rating is 18 mpg higher than the nonhybrid Avalon, and its estimated annual fuel costs are $700 cheaper. Still, comparison shopping never hurt anyone, so it’s worth your time to consider competitors like the Toyota Camry Hybrid or Hyundai Sonata Hybrid.

Should I Buy a New or Used Toyota Avalon Hybrid?

Toyota redesigned the Avalon Hybrid for the 2019 model year. The new model has an extra 15 horsepower and gets about 3 more mpg than the outgoing Avalon Hybrid. As part of the redesign, Toyota moved the battery pack from the trunk area to underneath the rear seat, so the 2019 model has more trunk space (by about 2 cubic feet). The 2019 Avalon Hybrid has more standard features than the 2018 model (including blind spot monitoring and rear cross traffic alert). It also offers features you couldn’t get in previous Avalon Hybrids, like a 9-inch touchscreen, Apple CarPlay, a head-up display, a surround-view camera, and rear cross traffic braking.

You’ll likely save money by shopping for a used Avalon Hybrid, but you’ll miss out on the benefits of the vehicle’s redesign. If you’re considering an older model, be sure to read our 2018 Avalon Hybrid review to help you decide if you can live without the 2019 model’s extra power and additional features.

We Did the Research for You: 14 Reviews Analyzed

Our car reviews include everything you need to know before heading to the dealership. We combine the opinions of the automotive press with quantifiable data like crash test results and reliability ratings to form a complete picture of every vehicle we rank.

Why You Can Trust Us

U.S. News Best Cars has been ranking vehicles since 2007, and our team has more than 75 years of combined experience in the automotive industry. Our car reviews are objective. To keep them that way, our editorial staff doesn’t accept expensive gifts or trips from automakers, and a third party handles all the advertising on our site.

How Much Does the Toyota Avalon Hybrid Cost?

Toyota Avalon Hybrid Versus the Competition

Which Is Better: Toyota Avalon Hybrid or Toyota Camry Hybrid?

The Toyota Camry Hybrid is a midsize car, and it’s one of the few vehicles that get significantly better mpg ratings than the Avalon Hybrid (by about 9 mpg). The Camry Hybrid gets decent power from its 208-horsepower powertrain, and it rides smoothly. The Avalon provides more trunk space, but both Toyotas have plenty of standard and available features and two rows of spacious seats. The Camry Hybrid wins based on price, though; its starting price is about $9,000 less than the Avalon’s. These are both great cars, but it’s hard to justify paying so much more for the Avalon when the Camry Hybrid measures up so well in every area.

Which Is Better: Toyota Avalon Hybrid or Hyundai Sonata Hybrid?

The Hyundai Sonata Hybrid is also a midsize car (the Avalon Hybrid really doesn’t have any competition among large cars). It’s not as powerful or fuel-efficient as the Avalon Hybrid, though the Sonata does offer a plug-in hybrid powertrain, and the Avalon does not. The Avalon offers more trunk space, but both vehicles provide plenty of room for passengers. The Toyota has a much longer features list, and it comes standard with more driver assistance features than the Hyundai even offers. The Avalon Hybrid is the better sedan, but the Sonata Hybrid’s base price is roughly $10,000 less than the Toyota’s, and that amount of savings may make the Hyundai the right choice for some buyers. 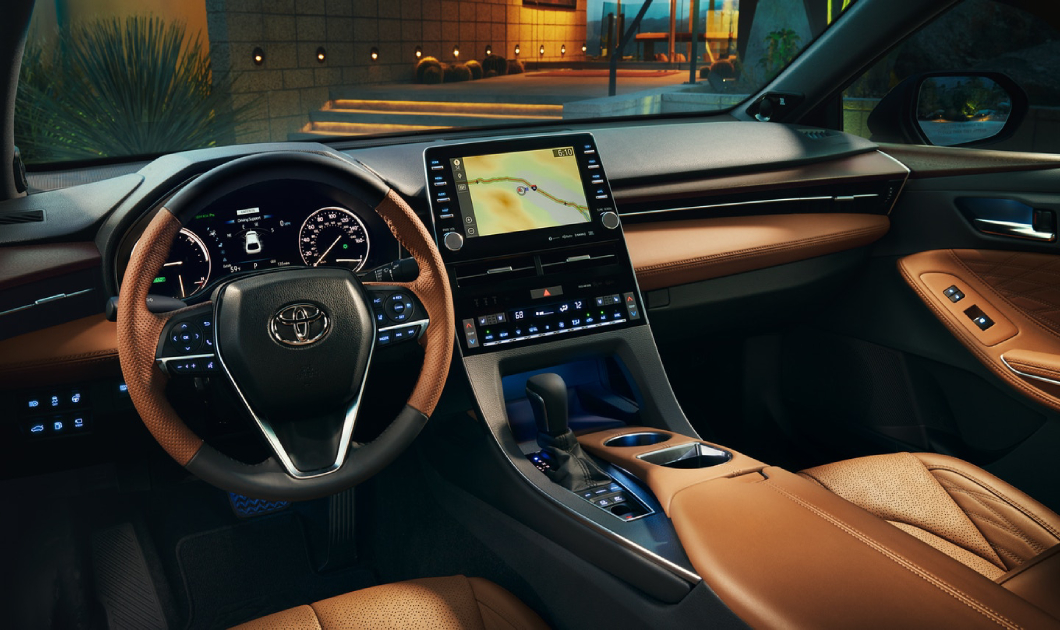 How Many People Does the Avalon Hybrid Seat?

The five-seat Avalon Hybrid provides the kind of space you want in a large sedan. The front seats are comfortable, the rear seats are supportive, and both rows have ample headroom and legroom for adult occupants.

There are two full sets of LATCH car-seat connectors.

The Avalon Hybrid had a great interior before the redesign, and the 2019’s is even better. It looks great and feels upscale, providing a level of interior quality few rivals can match.

Unlike some hybrids, the Avalon Hybrid has the same amount of trunk space as its nonhybrid counterpart, at just over 16 cubic feet. That’s enough room for roughly a dozen pieces of carry-on luggage, and you can fold down the rear seats for additional space.

The Entune infotainment system – and the optional navigation in particular – may not be as intuitive as rival systems, but Entune is fairly easy to use overall. Some complain that the touch screen is occasionally slow to respond to inputs. The 2019 Avalon Hybrid is among the first Toyotas to feature Apple CarPlay, though it still lacks Android Auto.

The Avalon Hybrid’s 215-horsepower powertrain consists of a four-cylinder engine, two electric motors, and a continuously variable automatic transmission (CVT). You’ll have no qualms with the CVT, but the engine feels a little weak in high-stress situations like climbing hills. For the most part, however, it delivers adequate power and acceleration.

The Avalon Hybrid gets outstanding gas mileage for a large sedan, earning 43 mpg in the city and 43 mpg on the highway. No other large car can touch those ratings.

Compared to the nonhybrid Avalon, you’ll save about $700 per year on gas driving the Avalon Hybrid (and keep in mind, the price difference between the two is only $1,000). You’ll even spend a little bit less on gas with the Avalon Hybrid than you would with some midsize hybrids, including the Hyundai Sonata Hybrid.

People think of hybrids and large sedans as plodders that are only good for getting from point A to point B. While the Avalon Hybrid is no sports car, it handles reasonably well and provides more driver engagement than you’d expect. It also rides smoothly over most road surfaces.

Is the Toyota Avalon Hybrid Reliable?

The 2019 Toyota Avalon Hybrid does not yet have a predicted reliability rating from J.D. Power.

Toyota backs the Avalon Hybrid with a three-year/36,000-mile limited warranty, a five-year/60,000-mile powertrain warranty, and an eight-year/100,000-mile warranty on hybrid components. These are competitive warranty terms for the large car class.

The 2019 Avalon Hybrid has not yet been crash tested by the Insurance Institute for Highway Safety or the National Highway Traffic Safety Administration.

Which Toyota Avalon Hybrid Model Is Right for Me?

There are three Avalon Hybrid trims: XLE, XSE, and Limited. All models feature a 215-horsepower powertrain consisting of a four-cylinder engine and two electric motors, a continuously variable automatic transmission, and front-wheel drive.

The base Avalon Hybrid XLE comes well-equipped and has a great interior, making it a fine choice for any buyer. If you want a few more features, however, you should skip over the XSE and step up to the Avalon Hybrid Limited, which comes with many comfort and convenience upgrades and offers more driver assistance features than the lower trims.

The Avalon Hybrid XLE has a base price of $36,500. It comes standard with dual-zone automatic climate control, Bluetooth, five USB ports, a Wi-Fi hotspot, an eight-speaker audio system, satellite radio, and the Entune infotainment system with a 9-inch touchscreen, Apple CarPlay, and Siri Eyes Free.

The Avalon Hybrid XSE comes with sportier styling and has a starting price of $39,000. In addition to the XLE trim’s features, the Avalon Hybrid XSE adds a moonroof, leatherette and suede upholstery, and wireless device charging. Available features include navigation and a 14-speaker JBL audio system.

The redesigned 2019 Toyota Avalon Hybrid rides smoothly, feels upscale inside, and provides plenty of active safety technology. It also gets the great fuel economy you expect from a hybrid. This is a worthwhile choice for any large-car shopper.

Don’t just take our word for it. Check out comments from some of the reviews that drive our rankings and analysis.