Home » New-Car Profit vs. Used-Car The Most Recent Report
Spread the love

Survey: 60% of Dealers Say New-Car Profits Declining.  A survey-based report from MAXDigital crystallizes the need for dealers to focus on profit opportunities created by trade-ins and other pre-owned vehicles.

Dealer Insights: Uncover Missing Profit Opportunities. Missing profit opportunities uncovered Over the past 3 years, MAXDigital has taken the initiative to understand key issues facing dealers, such as reducing salesperson turnover and building customer trust. This year, we focused on profitability. The latest industry research indicates new car profits are not improving, with 60% of dealers reporting profits are down the past two years. Meanwhile, dealers are reporting higher profits on used vehicles. Where are the profits going? More importantly, how can we get them back? MAXDigital, in conjunction with Erickson Research, surveyed 400+ automotive dealers across the United States to learn more.

CHICAGO — Dealer software provider MAXDigital released its third annual dealer research study on the subject of profitability and sales processes. In conjunction with Erickson Research, MAXDigital surveyed more than 430 dealers across the United States in late 2018.

Key findings from the research include:

Analysts suggested dealers focused on process change, a concept to which 45% of respondents were open. Dealers agreed with regular training for sales staff was the biggest opportunity to increase profitability, seven in 10 respondents reporting their salespeople have told them they don’t have enough training or information.

“It’s tougher than ever to capture gross profits in today’s market, but this study shows that profits can be made by looking in the right places: trade-ins and pre-owned,” said MAXDigital’s executive vice president, Mike Cavanaugh. “To capture more gross, dealers need to treat trade-ins with the same level of importance as the front and back end, and make preowned a priority.”

See more highlights in the infographic below 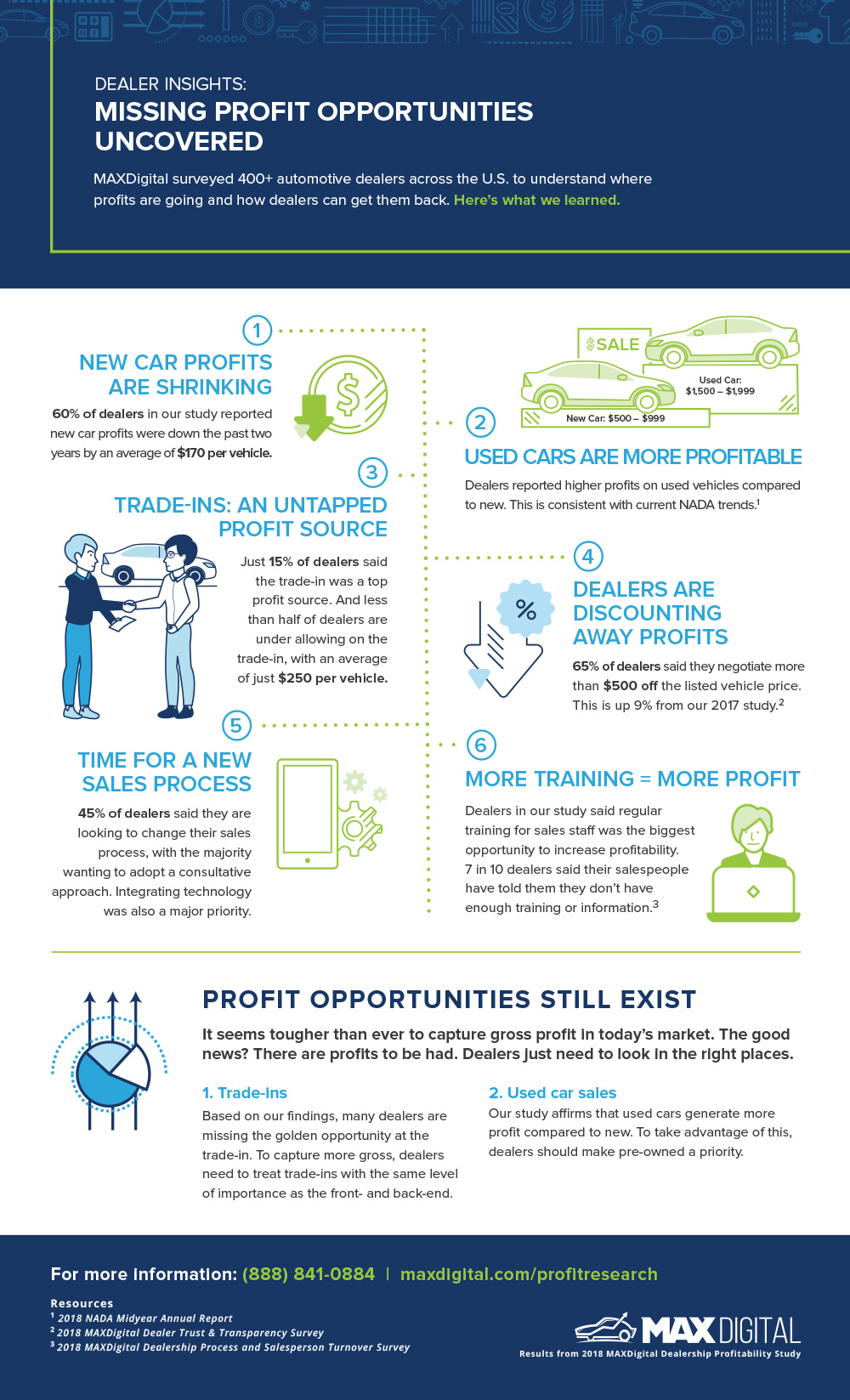 New-Car Profit vs. Used-Car The Most Recent Report. Source: https://maxdigital.com/profitresearch

To view the report in its entirety, Source: https://maxdigital.com/profitresearch