When Santa Brings a Car, They’ll Need a Bigger Tree

Every December, the holiday classics return to television, mainstay tales like “Frosty the Snowman” and “How the Grinch Stole Christmas.” And don’t forget those commercials where someone wakes up to a luxury car in the driveway on Christmas morning.

Yes, there are people who give a car worth $60,000, $80,000 or more to someone special during the holidays, even rushing into a dealership on Christmas Eve. So many people give costly cars as presents that gift sales can make up 10 percent or more of December sales for luxury auto dealers, brand representatives and dealers say.

Also, yes: Those gigantic car bows are real (picture below), and they’re a crucial factor in making the sale.

“Gift cars are about 15 percent of our December business,” Chris Brunner, general manager of Park Place Lexus in Plano, Tex., said in mid-December. “We have seven cars sitting on our lot right now waiting to be delivered on the 24th.”

December is rarely the biggest month for overall United States auto sales, but it has been the best sales month for Mercedes, Lexus, BMW and Lincoln for three years running, and one of the best for Cadillac and Jaguar, according to CarSalesBase.com. December sales of those six luxury marques made up as much as 14 percent of each brand’s annual sales. 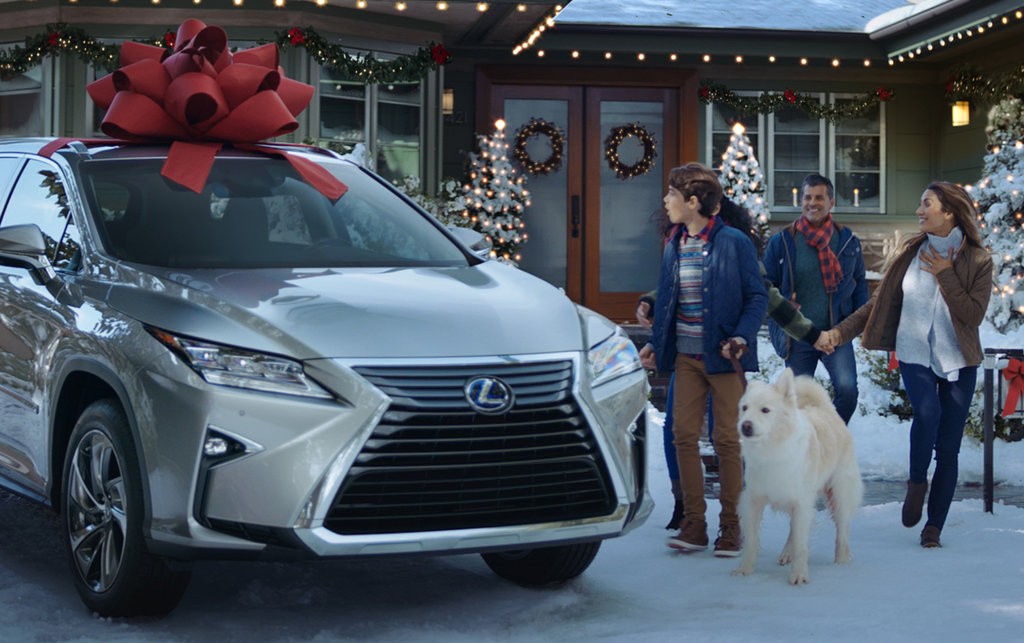 Lexus has run December to Remember commercials since 1999. Lexus

Individual dealers once typically pushed holiday sales in the same way as sales events around Memorial Day and Lincoln’s Birthday, but a 1997 promotion from Lexus put a Christmastime spin on things. In 1999, Lexus, Toyota’s luxury brand, premiered its “December to Remember” campaign — and those gigantic red bows. This year, Jaguar is going big for the holidays, with a prominent “Unwrap a Jaguar” campaign, and Lincoln, Ford, GMC Trucks, Chevy, Toyota and Nissan all have marketing timed to the holidays.

Of course, not every December car purchase is a gift, said Matt DeLorenzo, senior managing editor of Kelley Blue Book. The bulk of December sales are made to people picking up year-end bargains, customers exchanging leased cars and last-minute business purchases before the tax year ends. Still, the image of a gift car gives dealers a way to reframe end-of-the-year sales as more than moving leftover stock.

“It’s a great backdrop to push December sales,” Mr. DeLorenzo said, “but it’s like those Hallmark Christmas specials — it isn’t reality. Given that a car is the second-biggest purchase for most households, I doubt anyone is running out to buy a car behind their spouse’s back.”

Belay that Grinch-like sentiment for a moment and return to Park Place Lexus in Texas. There, less than 10 days before Christmas, Mr. Brunner was awaiting a buyer who is having a friend make his down payment.

“He knows his wife will spot it if he writes a check or puts it on his credit card,” he said. “We’re delivering that one during dinner on Christmas Eve.”

Yes, that happens, too. Mr. Brunner has sales representatives waiting to sneak cars into driveways during the wee hours of Christmas Day. “I’ve done a few deliveries at 4 in the morning,” he said.

“We had one salesman get a top hat and tuxedo, then rang the doorbell and presented the key with the car sitting out in front of the house,” he said. “However creative the purchaser wants to be, we’ll play along. It’s fun for us, too.”

Arranging a driveway surprise gets tricky in gated communities, though, so a more common approach at Jaguar of Tampa, Fla., is a surprise in the showroom, said Bryan Mobley, general manager of the Elder Automotive Group there. 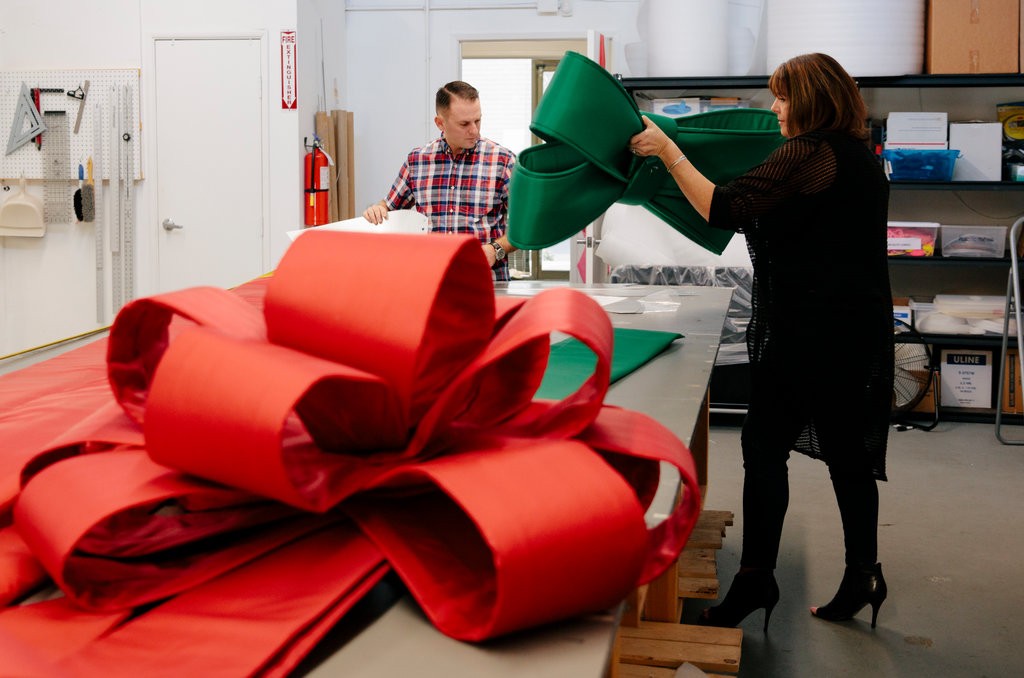 Amber Kingaard-Hughes with her husband, Jesse, at King Size Bows in Costa Mesa, Calif. She runs the business, which shipped its last batch of custom bows this week. “My dream job is to put bows on the Clydesdales for Budweiser,” she said. “That’d be classic.”CreditCreditKendrick Brinson for The New York Times

“We’re open Christmas Eve, and when people come in, we’ll have the car ready and bowed up, sitting by itself,” Mr. Mobley said. “The car has a big tag on the window that says, ‘Present for …’ which is massive — it’s a third of the size of the door.”

But it’s the bow that matters to the point that, some dealers say, no bow can mean no sale.

“The bow is a huge deal. That’s everything,” said Mr. Brunner of Park Place Lexus. “I wouldn’t say the car is secondary, but if you don’t have a bow — really?”

Park Place buys 60 bows to give away, in addition to bows bought through Lexus that are used in the showroom. At Jaguar, the bows are white for the cars and red for Land Rover SUVs.

“Every year, I run out of bows,” Mr. Mobley said. “I ask people that if the bow doesn’t have any sentimental value, please bring it back. But the nicer the bow, the less likely it is to come back.”

At King Size Bows in Costa Mesa, Calif., the question a few months ago was how to ship an order of Lexus-style bows to Kenya, said Amber Kingaard-Hughes, who runs the business with her mother, Jan Kingaard. The last batch of custom bows for the holidays shipped on Dec. 17, but the company still offers 41-inch stock bows for $50.

“We sell thousand of bows for cars during the year but, obviously, during the holidays, it ramps up,” said Ms. Kingaard-Hughes, who has handcrafted bows for planes and trains as well as automobiles, yachts and even horses. “My dream job is to put bows on the Clydesdales for Budweiser,” she added. “That’d be classic.”

Most gift cars are given by men to wives, girlfriends or children, but there are exceptions.

“I was working two full-time jobs and thought, ‘If not now, when?’” said Lori Perkins, a New Yorker who’s the publisher of Riverdale Avenue Books and Romance Daily News. Ms. Perkins picked up a brand-new red Volkswagen Beetle in 2011. “I decided to buy myself a new car for Christmas because I’d grown up watching the Christmas car ads.”

She insisted on a bow. “I made the dealer take a picture and I sent it as a Christmas card to my close friends,” she said. “It made me very happy.”

The only downside, she said, sighing, was that the dealer made her return the bow. “I would really have liked to have driven my new car down the Henry Hudson Parkway with the bow,” she said.