Home » What Is the Most Powerful Armored Vehicle on Earth? 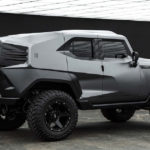 Introducing the Rezvani Tank, Models, Price, Designer, and the History THE BEGINNING As a young boy, founder Ferris Rezvani aspired to become a fighter pilot just like his father. In order to develop a thrill similar to flying an F-4 fighter jet, Mr. Rezvani set out to create an extreme sports car that gave drivers the opportunity to experience the same exhilaration and g-forces behind the wheel. This is represented in the Rezvani emblem, with wings representing his roots in aviation and steering wheel and racing stripes representing the brand’s dedication to driving. Rezvani Motors is an automotive designer and manufacturer of high-performance supercars based in Irvine, California. Rezvani Motors was founded by Iranian-American entrepreneur Ferris Rezvani, one of the designers of Vencer’s Sarthe supercar who formerly worked with Aston Martin, Ferrari, and DBC. The company’s main product is the Rezvani Beast, a self-funded project by Rezvani. Rezvani Motors released […]