Home » Reducing the Production of Vehicles 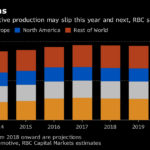 The Global Auto Industry Is Likely in First Recession Since 2009 The global auto industry is poised for its first sustained production drop since the financial crisis, according to RBC Capital Markets. Worldwide light-vehicle output fell 2.9 percent in the third quarter and probably will decline about 4 percent in the fourth quarter, analyst Joe Spak wrote in a report Wednesday. This will be the first back-to-back industrywide drop since 2009, he said. Automakers probably will produce about 94.6 million vehicles this year, down 0.6 percent from 2017, according to RBC’s estimates. The analysts are projecting output will drop again by 0.4 percent in 2019, with tempered growth resuming in the following years. The World’s Biggest Auto Markets Are Flashing Yellow and Red. Some of the world’s biggest auto markets may be reaching the end of the road for growth. After almost every major carmaker posted declining U.S. deliveries in […]